What is the purpose of the Aggie Park development?
Aggie Park will be a premier green space, bringing the Aggie Network and the community together for celebration, relaxation and inspiration.

Who will use Aggie Park? How will they benefit from this project?
Aggie Park will be enjoyed by all members of the Aggie Network – students, former students, faculty, staff, Aggie parents, and friends of Texas A&M. Students, former students and Aggie families are expected to be the primary users, but the park will also be accessible to residents of the Bryan-College Station community. Year-round usage will range from Aggie Ring Day to study and play, picnics to tailgating.

Why is this project important?
Aggie Park will provide additional green space on campus that is functional, inspiring and restorative. It will allow for outdoor study and student recreation, and will provide space for reflection and renewal. A new building within the park will provide needed improved space for Aggie Ring Day and other annual celebrations and events. 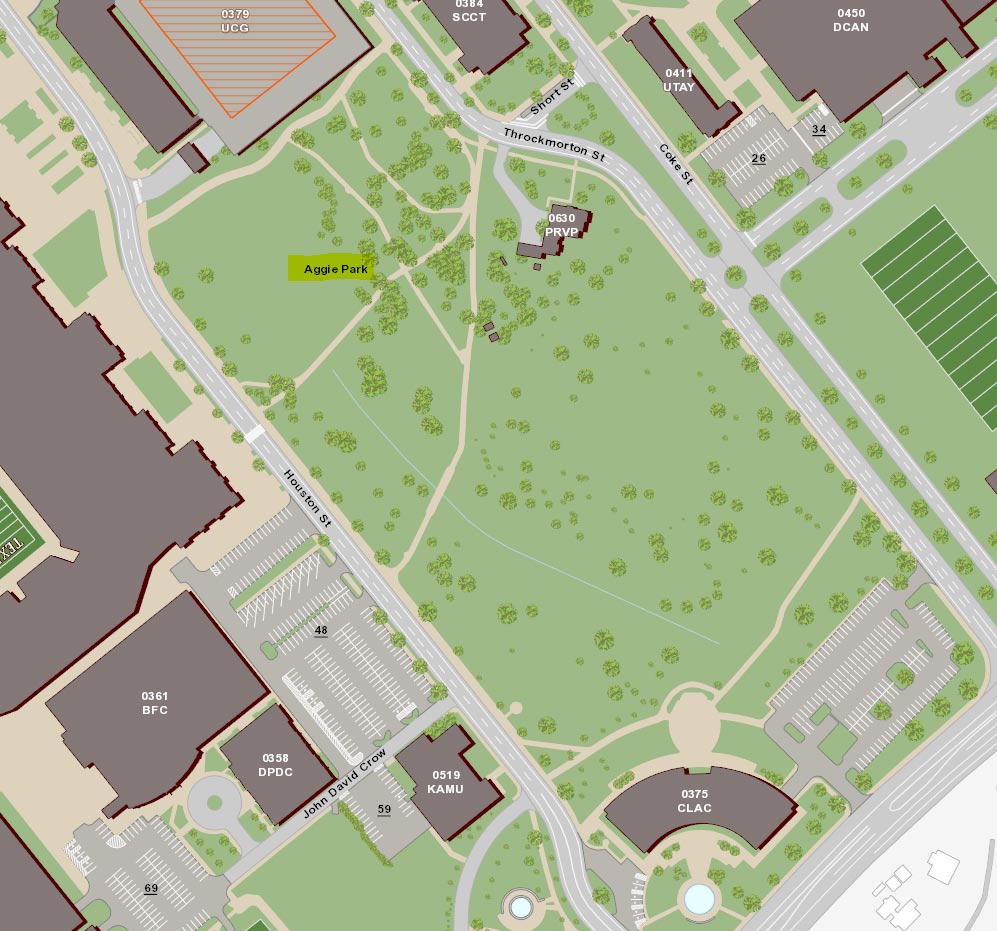 What and where is Spence Park?
In 1953, Texas A&M’s Board of Directors (now called the Board of Regents) designated Spence Park as the area between Throckmorton and Coke Streets bounded on the north by Joe Routt Boulevard. That park sits between the John J. Koldus Building and the Corps of Cadets Quad and is the site of the Sanders Corps of Cadets Center.

How is the Aggie Park development project being funded?
The development of Aggie Park will be funded by private donations raised by The Association of Former Students.

Who is managing this project?
The Association of Former Students is leasing the land on campus owned by The Texas A&M University System. The Association will provide contractor and project oversight and funding. The land will be turned back over to the university at the end of the project.

How will this project impact tailgating?
Due to ongoing construction, tailgating space will not be available in Aggie Park during the 2021 football season. Tailgating will be available in other campus locations as authorized by Texas A&M University; visit the university’s tailgating web page for details. Tailgaters can also consider some farther away parking areas with bus service to the stadium and great grassy areas: Lots 47, 50 and 51; Lots 18, 73 and 98; and Lots 110, 113 and Fan Field. Park construction is scheduled to be complete in time for the fall 2022 football season. After completion of the development project, fans will enjoy an enhanced tailgating experience with more tailgating space, level ground, and improved support infrastructure, including modern restroom facilities and access to food and beverage services. Tailgating operations in the park after the development will be overseen and managed by the university and the athletic department.

Will existing memorials in the park be impacted?
Existing memorials throughout Aggie Park have been inventoried and preserved. All will be incorporated into the park or relocated, following conversations with respective memorial donors.

Will any of the existing trees in the park be affected?
Every reasonable effort will be made to preserve or relocate existing, healthy trees in the park space. Some dead or unhealthy trees will be removed, along with some trees that would not survive the impact of construction. Work is underway to identify and preserve suitable wood from trees being removed for reuse in aspects of the development project. By the conclusion of the development project, there will be more trees in the park than there were before the project began.

What new features will be added to the park?
New features planned for the park include Wi-Fi, water features, an outdoor amphitheater, modern public restrooms, and improved green spaces and outdoor spaces for study, relaxation, tailgating, entertainment and recreation. There will also be a food-service facility as well as dedicated space for food trucks.

What is being done to improve storm water management?
The project will include infrastructure upgrades to ensure appropriate management of storm water.

Who provided input? What was the process for gathering stakeholder feedback on this project?
Beginning in 2018, representatives of a variety of populations — including student leaders, student organizations, faculty, staff, administrators, the Corps of Cadets, Texas A&M Athletics, and departments responsible for facilities, health, safety, law enforcement, technology and transportation — have provided input into desired park amenities and features.

Can I offer feedback on the project?
Certainly! Send your comments or questions to AggiePark@AggieNetwork.com.